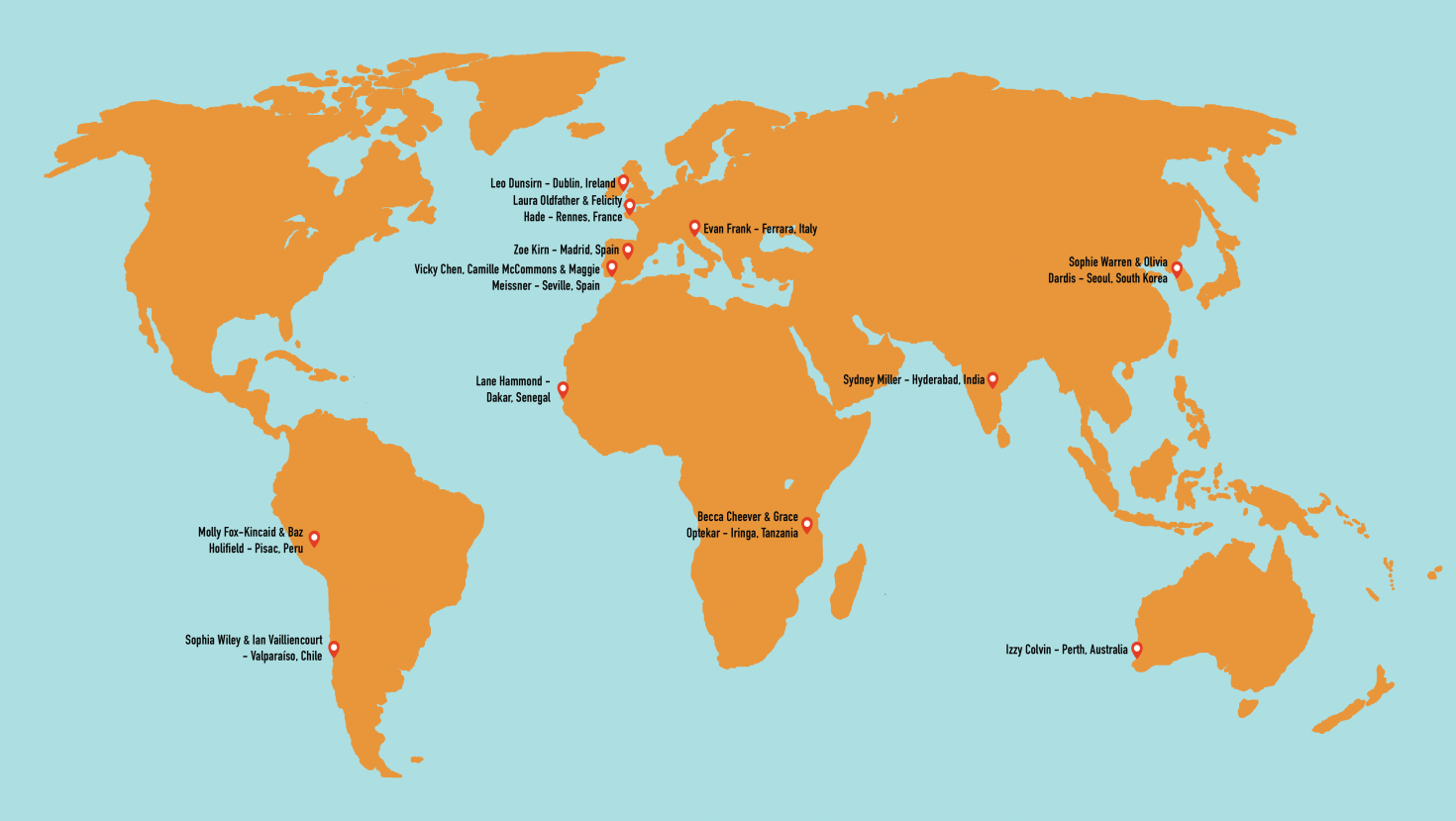 Students travel the world through CIEE

Students who participated in CIEE went for a variety of programs. Though more than half of the students chose to focus on language, some chose service and leadership or global discovery programs. All programs lasted three or four weeks, and travelers either stayed with host families or in dorms.

With the hopes of improving his Spanish and exploring a Latin American city, Ian Vailliencourt, senior, went to Valparaíso, Chile, for a language and culture program.

In the program, Vailliencourt lived with a host family throughout his four week stay in Chile. Living in a place that spoke a different language proved difficult for Vailliencourt, especially in the beginning.

However, with language classes every day during the week, along with being forced to communicate in Spanish in order to get around, Vailliencourt started to see his Spanish improve.

“I feel like I’m better at speaking in general. I had trouble with past tense and future tense, but I’d say like actual conversation got a lot better. And confidence too.”

The four weeks didn’t only include Spanish classes; various activities were also built into the program. For Vailliencourt, trying his hand at beekeeping was very memorable.

Overall, Vailliencourt’s major takeaway is his ability to be able to navigate a Spanish-speaking country.

“I feel like now I have the skill where [I can] go somewhere and figure it out on my own. How to get [from]  place to place, how to get food, stuff like that, and especially in another language. I feel now I could go to any Spanish-speaking country and at least be able to survive.”

I feel now I could go to any Spanish-speaking country and at least be able to survive.”

If given the opportunity, Vailliencourt would definitely travel abroad again. And the biggest piece of advice he would give to a future CIEE student is that you get out what you put in to the program.

“Make the best out of the program. Some people in our program would just not have a good attitude, like they just wanted to go home, and they wouldn’t just give it their all. I think the best thing to do is to put everything into it and just try to learn and try to put yourself in situations where you’ll learn because it’s like the best way to overall, in my opinion, have the whole experience.”

Leo Dunsirn, sophomore, wants to open his own business when he’s older. His interest in entrepreneurship, along with his Irish heritage, is why he went to Dublin, Ireland, for a program called ‘Global Entrepreneurship.’

The program lasted three weeks and balanced classes with cultural activities. His course taught him a lot about business, and though he mostly stayed in Dublin, he did take a trip west to scenic County Mayo.

“I learned how to look at things from a business standpoint. I got a lot more into it, it immersed me a lot more, just an overview in showing me what I want to do. [Also] I saw how different Ireland is, I learned about the culture there.”

I learned how to look at things from a business standpoint.”

As a part of his class, Dunsirn had to do a final project where students were supposed to create a business or restaurant and then present it in a slideshow.

“My project was an American diner themed restaurant that was basically bringing stuff here that we have over there.”

Though he learned a lot from the classes, Dunsirn’s favorite part of the trip was just being around the other program participants, who were from all over the U.S.

“I’d say overall the coolest thing was the place we stayed. It was just a college dorm area, we each had our own rooms and hangout that we went [to]. That was actually probably the most fun because there were a lot of cool people.”

After traveling abroad himself, Dunsirn thinks that those who are planning on traveling abroad should be open minded when it comes to other people, especially if they’re not there for a long period of time.

“If you’re going to travel abroad, I’d say be open minded and talk to people, because you only have three weeks there. If you wait until the second week to talk to people, you’re just going to be bored out of your mind. Be open to it and it’ll be a lot more fun.”

Hammond chose this program because she wanted to help people and immerse herself in a new culture. The trip, in terms of the volunteer work, was split into two different parts.

“We first went to a program where people who are deaf and mute are, and most of them have been kicked out of their families. We went there and did pottery with them … They helped us, we helped them, and then they sell their art. And then the second half of the trip, we went to a school, it’s a one classroom school with one teacher and it’s not in the best area. We taught them English and then people who knew French taught them French—and math.”

Hammond also took language classes during her trip and got to learn some Wolof, a language spoken in West Africa.

Going on this trip opened Hammond’s eyes to what life is like in different parts of the world. The school that Hammond taught at had very limited resources and money, which has her Hammond more aware of the education she is getting.

“I think the biggest thing that I’ve learned is just going to school and seeing how hard it is there for children to get [an] education. It just showed me not to take school for granted.”

Hammond encourages anyone who wants to travel abroad to do so.

“I would say, if you’re interested, do everything you can do to go on it because it’s just so life-changing. You meet people from all across the country and then you meet people there, so you’re meeting so many people and it’s an amazing experience.”

You meet people from all across the country and then you meet people there, so you’re meeting so many people and it’s an amazing experience.”

Sydney Miller, junior, originally signed up for ‘Empowering Girls through Health Education’ in Hyderabad, India. However, extreme temperatures altered the course of her entire trip.

Miller was supposed to go to a village and teach girls health education through a program called Voice for Girls. But because of a major heat wave, she ended up teaching English to a class of thirteen year old boys.

“It was still amazing, I loved it … We’d go there in the mornings and it was kind of like a camp, and they just had us coming in. They gave us books and we taught certain curriculum to like classes of kids.”

The teaching part of the trip lasted one week, and the other two weeks Miller got to travel to different parts of India and visit temples, markets and ancient villages.

The most memorable part of Miller’s trip happened during a three day excursion to Hampi, India. They were planning on watching a family of drummers play, when people from the government approached Miller’s group and told them they weren’t allowed. Due to her tour guide’s determination however, Miller got to see the drummers anyway.

“Our tour guide in Hampi, she was a character …  She got us all on this bus and we went to this five star resort that didn’t know we were going there. We basically just walked into this five star resort without even calling ahead. And it was like maybe ten at night at this point and it was raining, and we basically just went into this field at this resort, and like danced with these people while they were playing drums. It was crazy.”

One discussion topic that came up throughout Miller’s trip was white colonialism. Some of the program leaders talked to the travelers about the history of British colonization in India, which was why Miller and the rest of her group were teaching English to kids there.

There was also conversation around catering to Western ideals and the potential negative effects of going into a community to change things, but only for a short period of time. The original program was supposed to be about teaching girls health education, but by the end, Miller felt that it was a good thing they didn’t end up doing that.

“We kind of came there … with the idea of ‘fixing’ something that was a problem. But over the time we were there, we were like, ‘Oh, this isn’t necessarily a problem, it’s just a different way of doing things.’ And we talked a lot about … how if we had been teaching girls health education, we would have needed a lot more time and commitment to be able to do that. And I think that just recognizing that when things are different, it’s not always a problem.”

We kind of came there … with the idea of ‘fixing’ something that was a problem. But over the time we were there, we were like, ‘Oh, this isn’t necessarily a problem, it’s just a different way of doing things.’”

Though Miller’s time in India was nothing like she thought it was going to be, she sees it as a positive thing.

“It definitely wasn’t what I was expecting because they changed the program, but honestly, I think I loved it even more than I think I would have loved the original program. And I met so many really cool people there that I’m still friends with now.”

Izzy Colvin, sophomore, would have never described herself as super adventurous before this summer. But this past July, she stepped out of her comfort zone and flew across the world to Perth, Australia for a global discovery program called ‘Australian Wildlife Conservation.’

Colvin has always been passionate about animals, so for her the trip was the perfect opportunity to learn more.

“I’ve always been kind of been interested in animals … I didn’t want to be a vet, but I still wanted to do something with animals. And on this trip … you got to do a little bit of everything: marine biology, some veterinary stuff, a little sample of everything.”

During her trip, Colvin got to visit a variety of places. She studied marine life at beaches, went hiking and did tourist things. Her favorite place, however, was Caversham Wildlife Park.

“We went to Caversham Wildlife Park, which is a big fenced in area full of wildlife, and they have some unique breeding programs there. We got to see a lot of the animals, we got to help feed kangaroos [and] pet a koala. So that was really awesome.”.

Though the plane ride was two days long, Colvin feels that every bit of it was worth it. She got to try out different areas of animal conservation, giving her a better idea of each.

“It’s definitely widened my idea of what I can do in the future. I’m still a little unsure, but marine biology is definitely really interesting to me now.”

Additionally, Colvin has learned a lot about herself.

“I also learned a little more about myself, because I’m not a super adventurous person normally. I would have never thought I’m a like going-to-Australia kind of person. But I did it, so … I can do hard things, that’s cool.”

I would have never thought I’m a like going-to-Australia kind of person. But I did it, so … I can do hard things, that’s cool.”

Colvin encourages anyone who is thinking about traveling abroad to go for it.

“I just kind of went for it and I have no regrets. It’s the best thing I’ve ever done. It was so incredible … You just have to go out there and do something crazy like go to Australia.”