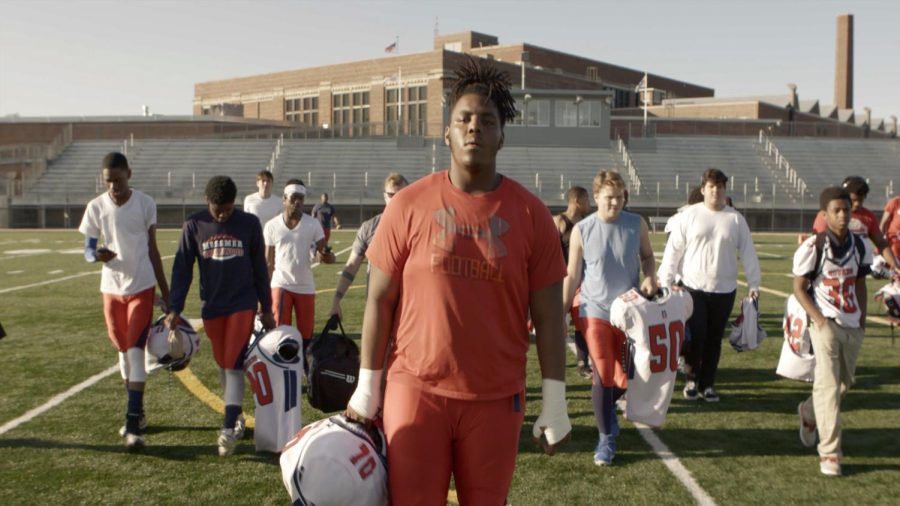 Piarus Walker, backed by his Messwood teammates, holds a helmet with bleachers in the background. Piarus is one of the featured students in the "Messwood" film.

On November 14, Emily Kuester and Brad Lichtenstein, co-directors and producers, saw their film “Messwood” premiere at the DOC NYC film festival. The film explores the Messwood football program — a unique co-operative that combines the football teams from Shorewood and Messmer high schools — during the 2019 season. The main subjects of the film include head football coach Antoine Davis, two Messmer and two Shorewood students: Piarus and Fred from Messmer, and Maxwell Curro and Amarion Davis from Shorewood.

“Max, Amarion and Fred all bring a certain level of youthful[ness] because we followed them when they were sophomores,” Kuester said. “You get this beautiful young person outlook on the world and see how they navigate certain spaces that they are in.”

Lichtenstein, a Shorewood parent, was originally interested in covering his own community surrounding the To Kill a Mockingbird drama production controversy and subsequent school board meetings in the fall of 2018. While he was not allowed to film inside English classrooms and during school, both he and Kuester decided that a documentary on Messwood Football could cover similar themes. During the filming process, the producers were present for many parts of the student’s lives. They came to practices, games and even ventured into the personal lives of the people who were featured.

“Whenever they were recording they would give me food,” said Amarion Davis. “It was pretty chill. They took care of us.”

A primary focus of the documentary is the differences in life experiences between students from the two schools, and the contrast between two Shorewood students and close friends, Davis, who is Black, and Curro, who is white. Despite Messmer and Shorewood residing on the same street, only a mile apart, the lived experiences of the primarily Black Messmer students, and majority-white suburban Shorewood students differ in various ways. The documentary depicts Shorewood in a way many residents might question; however, it aims to take an outside view to the community.

“As someone who doesn’t live in Shorewood, the perspective we took is a zoomed-out view of how I think a lot of people view and feel about Shorewood,” Kuester said.

At the live premiere, the producers were able to see how the audience reacted to different aspects of the film. The film continued to be available through DOC NYC’s virtual festival through Nov. 28.

“We tried really hard to put a lot of humor in the film,” Lichtenstein said. “You really don’t know if humor is going to work until you’re with an audience, and people were laughing a lot which was good to hear.”

Certain critics claimed that the documentary introduced certain topics surrounding race without the nuance necessary to completely understand the racial dynamics of the football team; however, the producers focused on portraying the Messwood team accurately and showing the true essence of the team. Kuester and Lichtenstein recognize that the story should start deeper conversations surrounding race and segregation in Milwaukee.

“I want people to really think, and I hope that at some point everyone is uncomfortable, because I think that’s when the most growth comes,” Kuester said.

“I just don’t make message films, and I don’t want to. I just don’t think they’re interesting, because human beings and human life is much more complex than a slogan or a message,” Lichtenstein said. “I hope that the films I’m involved with provoke people to have deeper engagements with their world.”

While the producers view the Messwood football team as an example of racial dynamics and justice, some people who are on the team feel differently. Antoine Davis’ first line in the movie alouds his belief that there is no story surrounding the Messwood football team as “they are just boys playing football.” His stance hasn’t changed as he still believes that it is a universal quality of sports that they bring separate communities and individuals together.

“I would say [the film] spent too much time trying to find the difference between Milwaukee and Shorewood as communities rather than on those boys themselves… Our football team is no different than any other football program. I’ve never called ourselves special because this is what we do, what we know,” Antoine Davis said.

Curro feels that the film’s depiction of Shorewood lacked depth.

“You just sort of see [Shorewood] in the movie as this white suburb,” Curro said. “It is a majority white suburb, yes. But there’s way more to it than just calling it that.”

However, Lichtenstein’s goal was to portray the stories of all subjects with accuracy and authenticity.

“We try to be very true to the participants in the film. Ultimately when you make a film like this, where you’re following people’s lives, your obligation as a steward of the stories is to bring out their authentic selves into the film,” Lichtenstein said.

The general consensus among Curro and Coach Davis is that racial dynamics shouldn’t — and don’t — have any role in how they play football. Events such as the murder of George Floyd and the COVID-19 pandemic which have happened since the filming of the documentary haven’t had an impact on how the team interacts or plays.

“All the events that have happened, they really haven’t affected our team much,” Curro said. “We are just a regular football team… those outside events don’t really play a factor in the team dynamic at all.”

This is one of the pillars of Coach Davis’ philosophy. Ultimately, Messwood is a football team, not some kind of social experiment. Davis interacts with each player as an individual, creating an environment some viewers might find problematic and others might align with.

While debatable to outsiders, Coach Davis’ impact on young boys’ development is undeniable to those on the team. Even though the culture intentionally surrounds just football, the lessons that the sport and Coach Davis’ teach the players extend beyond the sport.

“To be honest, Coach Davis is one of those people who taught me a lot because I didn’t have much of a male influence growing up,” Amarion Davis said. “Him teaching me how to work out, I really feel like [he] changed my life, with working out and being able to be physically [active].”

“I think the number one thing you do as a football coach is to teach young men how to be responsible,” Antoine Davis said.

Kuester and Lichtenstein understood this interesting aspect of the team’s culture, as it was one factor they were initially drawn to from a story stand-point.

“Coach Davis is a really interesting man because he is dedicated to creating a space where race is not the primary way that people approach each other and some people think that that is a really valuable space, particularly in contemporary America. Other people think that it’s not leaving room for conversations that need to happen and… I think [it] is one of the most interesting things about the film,” Lichtenstein said.

At some point in the near future, Participant Media, the production company, will sell the film so it is available for viewers to watch on a streaming service. Community members are encouraged to watch the film when it becomes available.