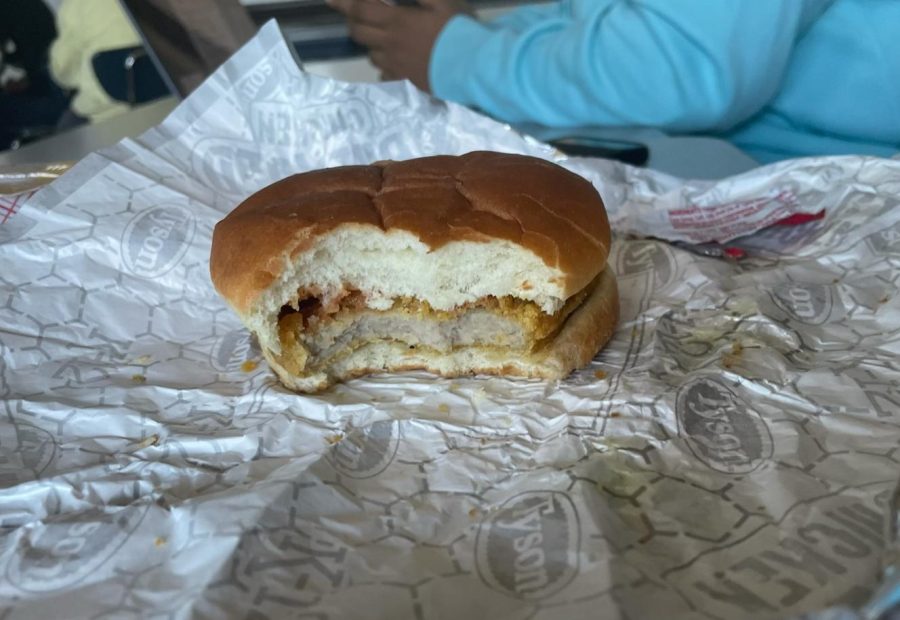 The POD's chicken patty sandwich. Many students feel that such lunch options lack the nutritional value necessary to support them.

SHS students have become increasingly frustrated about the quality of the lunches distributed by the school’s a-la-carte lunch provider, Provisions On Demand (POD), an on-the-go option for student lunches. As the cafeteria is now closed due to construction, more students are relying on the POD for their lunch.

Keroan Ocasio-Vazquez, senior, started a petition in late October to amplify the frustrations of the student body.

“There are big quantities of people who have different dietary needs, and [the POD] should meet those as best [it] can,” Ocasio-Vazquez said. “I’ve had students come up to me and be like, ‘this is the only meal of my day, it’s crazy that this is what I get fed.’”

Bryan Terry Jr., senior, has also been vocal about this issue.

“I think [the food] is very disgusting, especially if you have dietary restrictions,” Terry Jr. said. “The food… doesn’t taste good and [isn’t] healthy. I think the students deserve a lot better than what we’re getting.”

Of the few options that cater to students with dietary restrictions, most come in small portions that do not serve as a full lunch. Rowan Townsend, sophomore, is especially critical of the few available vegetarian options.

“[They aren’t] sufficient for [young] students, [because of] the small portions,” Townsend said.

Though students get a free meal each day, some are disturbed by the fact that they have to pay for a sufficient amount of food.

“You are still hungry after [you eat], but if you want more you have to pay for another meal. Students shouldn’t be in that situation,” Terry Jr. said.

Ocasio-Vazquez’s petition swiftly gained over 400 signatures, and was finally ready to take to Principal Tim Kenney. Kenney is attempting to address these complaints.

“If the students had not brought this to me I would not have known that [the students] were unhappy with the food. I don’t know what has happened with it, but I’m going to find out,” Kenney said.

Originally, many students held positive opinions about the POD when the service began in the 2018-19 school year, when Terry Jr. was a freshman.

“It actually started off really well. They had good food [and] a lot of options,” Terry Jr. said. “I think back and say ‘wow, we were eating really, really well’ and now we are in this situation.”

As of recently, the federal government has sponsored free lunches for all public school students, because the pandemic has caused many school kitchens to close. One might think that this would increase the food quality, but these expectations have not been met.

“I think that [the government sponsoring free lunches] has something to do with [the food quality], but it’s not an excuse for the food to not be good. I’m taking this very seriously,” Kenney said.

Water availability at school has also become a prominent issue. The water fountains have been shut down as a COVID precaution, often leaving students reliant on purchasing a bottle of water at the POD.

“The bubblers are shut down [due to the pandemic], and the water is expensive at the POD,” Terry Jr. said.

Kenney assures students that he is working on turning the bubblers back on.

“I am working on getting the bubblers reengaged, since we know that COVID is not transmitted by surface contact and it would be safe,” said Kenney.

Another inconvenience is the long wait for lunch caused by the line of people stretching down the hall. Because the cafeteria, formally known as the Youth Center, is closed, more students have been relying on the POD for hot lunch, leading to longer lines.

“Two weeks from now, we should have the Youth Center back open again and that serving area will become another option for students,” Kenney said.

Kenney has already made strides to tackle the school lunch issue, starting by communicating with the district’s director of food service.

“I have been communicating with the Shorewood School District Director of Food Services, and she knows about the petition,” Kenney said. “My recommendation for [her] is to get a student group together to talk about what [they] are expecting and looking for.”

The director of food services was not available for comment.