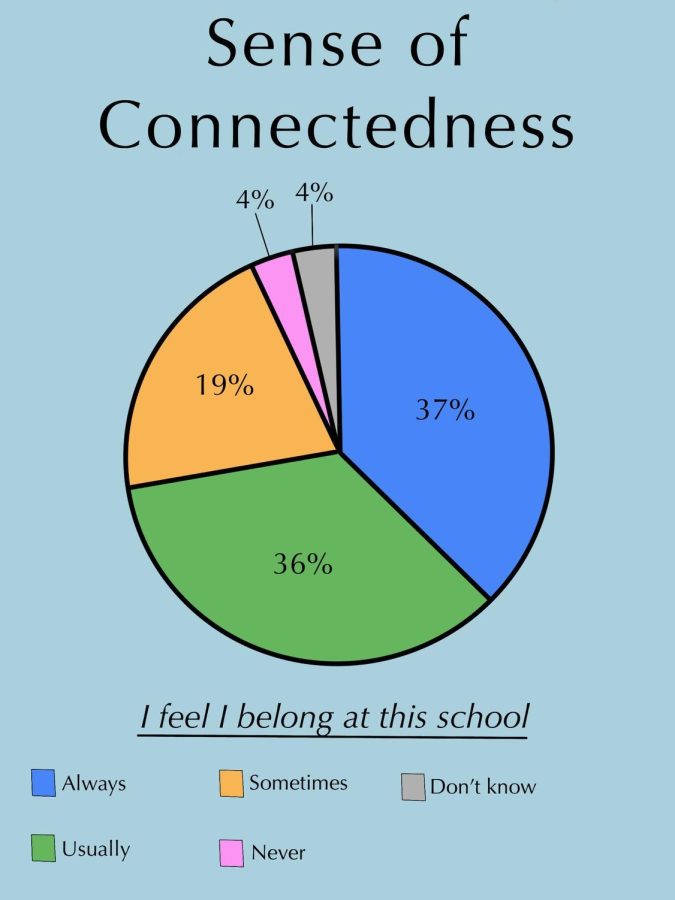 Results from the School Perceptions Surveys taken by many students and staff last spring were recently published.  The findings praised Shorewood for some things while also offering areas for improvement, such as district communication, attracting high quality staff and student college preparation.

820 students in grades 4-12 replied to the survey. 80 to 90 percent of the students reported having good relationships with adults at school, and helping others when they saw a need. Around three-quarters of the students felt that they worked well with other students and were able to get through challenges and stay committed to tasks. The majority of students felt that they were safe, cared for and respected at school, and that one or more adults in their school cared about their future. The lowest positive response rate was for the question “I believe what I am learning in school connects to the real world”, where 49 percent of students replied “always” or “usually.”

Part of the survey stresses the importance of creating trusting relationships between students and adults in the building, which SHS principal Tim Kenney hopes to achieve by establishing an advisory period at the high school.

“From the social-emotional standpoint, what we decided to do coming out of last year where our students spent the school year largely just virtual –– which is a very isolating experience on many levels for students, and there’s a lot of social emotional needs of students this year –– we’ve been, over the past few years, talking about putting in an advisory block,” Kenney said.

Kenney also sees the advisory period as a way to create connections that last longer than 9 months.

“As a ninth grader, you’ll have the same advisory teacher all four years,” Kenney said. “So ideally, you’ll have somebody who you can go to if you need help strategizing how to get back on track academically. There’s team building activities that will go on. It’s supposed to be really creating, like, a family atmosphere in these advisories.”

In the Staff Perceptions Survey taken by 159 staff members, respondents were most optimistic about Shorewood’s academic mastery (90 percent replied that it was “great” or “good”). Approximately 80 percent of the staff were also positive about students’ access to additional support, including support for their social and emotional needs. 99 percent of staff members agreed that students cared about each other at Shorewood Schools. Staff members were less confident about the District’s process for evaluating new initiatives (48 percent agreed that there was an evaluation process).

“One of the things that I enjoy about being a language teacher is that oftentimes I have kids for multiple years in a row,” Lowery said. “I have Spanish V right now, which is all seniors. And some of those students I had as eighth graders, some of them I had as freshmen, some of them I had as eighth graders and freshmen. So to see that growth, not only from within a year but from year to year, I think it’s something that I really value about what I do.”

As for things that SHS could improve, Lowery would also like to see more cleanliness in the high school buildings. He also expressed a desire for more AP classes.

“I’m teaching Spanish V. Right now, it’s not an AP class, but we’re hoping to build it into one,” Lowery said. “It’s the equivalent of a second semester, sophomore year college class… For me to have not only the opportunity to teach that, but to have kids that are at such a high level in their Spanish that we can offer that course, I think that’s a really big strength.”

Overall, the School Perceptions Surveys have helped shed light on what staff and students value at Shorewood schools and have offered potential steps forward in the future.

The Staff, Student and Parent Perceptions Surveys can be accessed through this link: https://www.shorewood.k12.wi.us/apps/pages/schoolperceptionssurvey