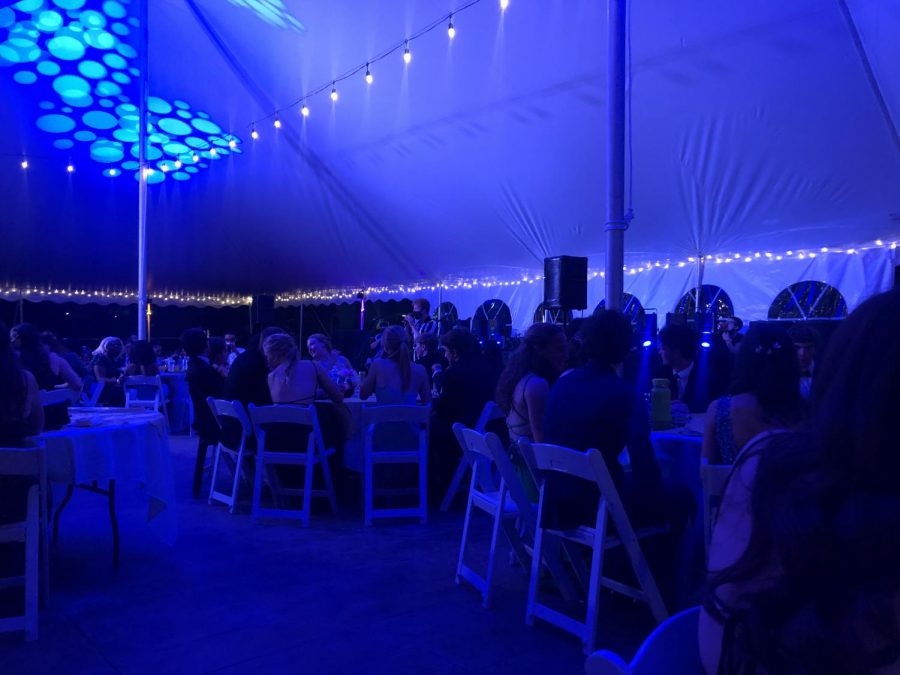 Students sit under the prom tent. The event was disappointing for many students.

At the end of a difficult year, seniors looked forward to two events that culminated their four years at Shorewood High School — Senior Fling and “Mask”erade Ball. Both were held back to back at the outdoor space at the Twisted Fisherman, a restaurant along the Milwaukee River. Unfortunately, these events did not live up to their initial expectations as they were more reminiscent of middle school activity nights.

For the senior celebration, there were two entertainment acts. The first was juggler and comedian Marcus Monroe, and the second was hypnotist Paul Knight. Monroe, a Shorewood alumnus, was definitely a natural performer, but it was difficult to follow his routine as his act consisted of sporadic jokes leading to a spurt of juggling, then repeating this pattern. His sense of humor was a strange mixture between immature and inappropriate. His routine was surprisingly engaging, but only because the audience was waiting for the next joke that would make them groan in discomfort.

Knight’s performance as a hypnotist was slightly misleading. The beginning of the show was intriguing, but as Knight continued with his hypnosis routine, it was clear that all student volunteers were just following his direction instead of truly being hypnotized. The show was entertaining  at times, some highlights including the singing contest and when he made one of the volunteers “forget” the number five.

There were other activities offered to seniors, such as a photo booth and yard games. Because the weather on this day was not ideal, a lot of the outdoor activities could not be played. Attendees also had the option to socialize with friends at the tables while they watched the entertainment or snacked on food.

The food for the night was sub par. It consisted of pulled pork sandwiches, swedish meatballs, varied meat wraps and an assortment of cheese, crackers and fruit.

There was a similar setup on the second event: the junior and senior “Mask”erade, commonly known as prom. Held the night after Senior Fling, this event was more formal and enjoyable.

The weather was much warmer, allowing students to participate in activities like cornhole and ping pong. This caused attendees to be more spread out instead of remaining under the tent for the entire night. The setting by the river and the string lights were enchanting and added to the ambiance of the evening.

The food, on the other hand, was still disappointing. It consisted of prepackaged containers of vegetables and some mozzarella sticks. There were brownies, though, which might have been the highlight.

Overall, the energy of the “Mask”erade Ball was much better than the spring fling. However, ComedySportz, a competitive improv show, was not a hit. Most students ended the night during this performance, leaving prematurely. The humor was very immature for the high school audience.

Additionally, Marcus Monroe returned to perform again. His routine included some more interesting tricks and stunts than the previous night. However, given the shortcomings of his routine on both days, it would have been refreshing to have a different performance.

The effort put in by the planning committee was greatly appreciated, especially amidst such a hard year. However, the experience fell short overall.