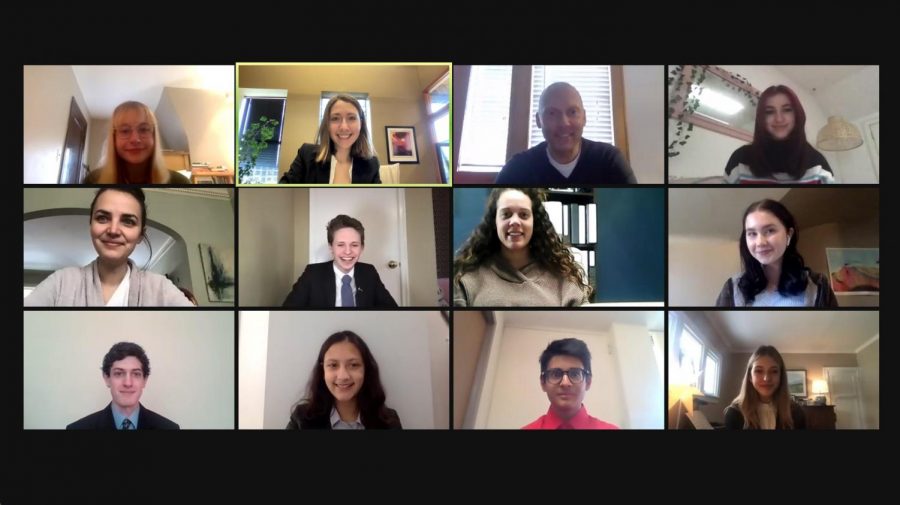 The mock trial team gathers on Zoom after their second place finish at state. Their competitions were entirely virtual this year.

Mock Trial wrapped up a successful season on March 9, despite being fully online. Practicing and competing virtually presented unique difficulties, and the season looked a lot different than in previous years. The grey team placed second at the regional competition in early February; the red team placed first, moved on to State in early March and finished the season with an impressive second place finish at the state competition.

All of the competitions were also held on Zoom. There were some technical challenges throughout the course of the season, like an hour long delay at the state competition, but overall, everything went well considering the new format.

“[The season] ran as smoothly as one could expect, given the circumstances,” said Kara Rooney, senior leader and red team member.

In addition to technical problems posed by online competitions, the team found it harder to perform in some ways.

“Trying to get your voice to come across in a Zoom format is very different than when you’re in a courtroom,” said Jasmyne Borton, attorney and volunteer coach. “You’re not getting the same verbal and nonverbal cues that you would get if you were in person.”

The team held two hour long practices three times a week over Zoom for the majority of the season. Experienced students took on leadership roles to organize practices, with senior Emma Stenzel running the Zoom meetings and facilitating contact between the teams and the coaches.

“[The student leaders] would set up meetings, and if we required any additional practices they would be in charge of scheduling that,” Kahate Desouza said. “I am really thankful because they were able to do that, and they pulled it off really well.”

“The seniors have done a really good job this year… of finding ways to get the [new members] to feel excited and to feel a part of Mock Trial, even though we didn’t get to all meet in person,” Borton said. “I think that a lot of leadership and self motivation went into this year’s practice.”

As someone who isn’t graduating this year, Kahate Desouza looks forward to when the team will be able to meet in person again.

“Everyone has told me at great length how fun it is in person, that if I had fun this year, it will be even more fun next year because there’s a lot more comradery,” Kahate Desouza said. “There’s a lot more community when you’re actually all in the same place at once.”

Being fully virtual with no in person contact at all was a challenge that was somewhat unique to Shorewood. Other schools were able to compete in the same room as each other, which provided a significant advantage because they were able to ask each other questions and communicate directly during competitions. In contrast, fully virtual teams like Shorewood were unable to communicate with each other in the same way since each team member was competing in their own home.

“It’s definitely not fair, but there’s nothing else that could be done about it because we wanted to be safe and socially distanced,” Rooney said.

Despite the challenges, Mock Trial was able to adapt and have a very successful season.

“With the success of making it to the state finals, I think they really adjusted and adapted to the virtual format and did great,” Borton said. “I was very, very proud, and very impressed by their performance this year.”

“I’m really proud of everyone who participated this year,” Rooney said. “Everyone worked really, really hard. I think this is the most prepared we’ve ever been, and that’s why we were so successful.”