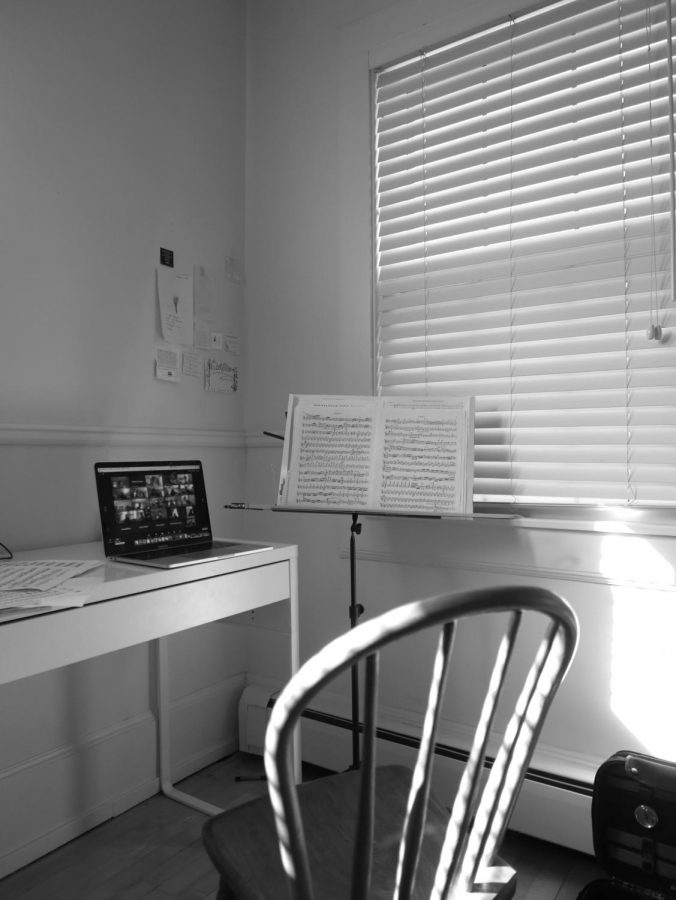 With all courses being virtual this school year, some may wonder about the technicalities of music classes. Like all teachers, Karen Frink, orchestra director, and Bryan Kujawa, band director, are trying to manage their curriculum online.

“It’s been okay. I think that a lot of the responsibility is on the individual students because we don’t have each other in class to learn from,” Frink said. “It’s because we’re in the online environment [that] only one person can talk at a time. Of course, in orchestra, the music ensemble is everyone making music at the same time. So it’s really hard that way.”

“With the technology and Zoom being [how] it is, there’s about a two to ten second delay that happens from whatever I’m saying right now live before it gets to you… Depending on [students’] bandwidth, home situation and WiFi, there’s a delay that happens where you can’t make music very well in time,” Kujawa said.

Henry Heyden, junior, says the classes have found a way around this obstacle.

“We’re still figuring out the best way to play together. Currently we’re mostly working on a piece by listening to a recording and playing along while muted,” Heyden said.

Although each student is muted on Zoom while playing, Frink encourages them to keep their video on.

“I have them [put] their video on so I can see their bows moving,” Frink said. “It’s the only way with string playing that I can see if they’re understanding what I’m doing.”

Through Zoom and Google Classroom, Frink has been implementing music recordings in lessons.

“I have professional recordings where I take the recording and I’m able to slow it down with a special app. So we play everything under tempo along the recording. That’s been helpful to the kids too because they can hear all of the parts then in their headphones and they just kind of play along,” Frink said.

Frink will also use this technology so that students can record their own progress.

“A great way to do it is with Flipgrid. Kids can just do a thirty second, forty-five second video or audio recording,” Frink said. “So they’ll just share it with me and I can just listen and see how they’re doing.”

Similarly, Kujawa is implementing recordings, but with a different program: SmartMusic.

“What we’ve been focusing on is a program called SmartMusic which essentially has various exercises and pieces of music in a website platform that allows for some form of instruction,” Kujawa said.

SmartMusic has more options for learning as well.

“I plan to use the SmartMusic program more frequently where students can actually submit a recording and while they’re playing, they see the notes on their screen and it can tell them what was right [and] what was wrong. Even I can go back and listen and then type in feedback,” Kujawa said.

Frink and Kujawa are now focusing on getting students into small groups so that they can play together in person.

“My goal by the end of October is to see if we can give that experience to every child in orchestra who would like that. Some kids don’t feel safe. But I think there are kids that do feel safe and would like that opportunity to just play with a small group of people– to go through the music together,” Frink said.

This had already been able to happen for some students.

“We’re able to play in small groups on Wednesdays, socially distanced of course, and are still getting to learn and play music,” said Isa Travanty, senior.

In terms of concerts and performances, the music department is going to hold off for now.

“As a district performing arts staff, we pretty much said that there’s not going to be any concerts until at least December. And the reason for that is to see of course how the pandemic plays out and what are all the safety protocols,” Kujawa said. “It’s certainly challenging because we are typically a community performance based class.”

Until then, Frink and Kujawa are exploring different ways for students to share their work safely. Kujawa is considering a video compilation.

“We’re going to try to put together a virtual video as everyone sends in their parts and then with a lot of editing, compile it together to create a virtual performance,” Kujawa said.

However, Frink is opposed to this idea.

“That’s not really performance. That’s having everybody play a part and putting it all together. What I’d like to do this fall, if they don’t allow large groups, is [have] a couple of mini recitals where kids can play for each other if they’re working on something with a teacher… or if they want to share something. It would have to just be small groups in person and maybe we could record it and share it with parents,” Frink said.

Although the entire situation surrounding online school may not be ideal, Frink wants to remind the students that everyone is in it together.

“I think the students have to realize that for the teachers this is really hard too. So anything that you guys can kind of give back to us is so helpful. I really miss my students [and] I really miss live music performance,” Frink said.