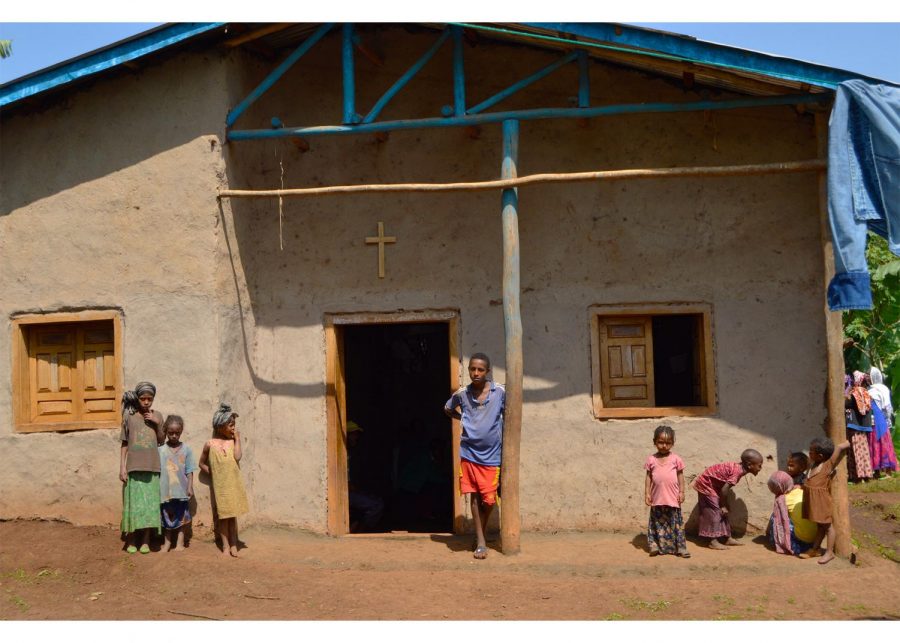 Hiwot Schutz’s “Holy Trinity,” which was shot in Ethiopia. Schutz won a gold key for the photograph.

“The whole thing was… spur of the moment… I had to submit these photos into this competition for class,” said Leland Hanewall, senior. “I didn’t really choose to do it on my own, so this whole thing was more of a happy accident.”

After submitting multiple photos, Hanewall received three Gold Keys, as well as a nomination for the American Vision Award.

For this award, five people are nominated from each state, and one person is chosen out of those five nominees. They are given to one writer and one artist from each region.

“The piece that I only got a gold key for is a photograph of Alemitu Caldart,” Hanewall said. “She’s got an earring on that says ‘Black Lives Matter’; it’s kind of a profile of her side. I [also] have a photo of two students running up a stairway. The photo that won the gold key and the nomination was a photo [from] while we were visiting my grandfather in the hospital.”

The photograph of his grandfather carries a lot of emotional weight for Hanewall.

“My grandfather is in hospice right now, so he’ll pass away probably pretty soon,” Hanewall said. “The photograph is of my mother’s hands, [and] they are kind of tightly clasped together. I think it shows her resilience in kind of a time of struggle and emotional distress, and I think that is something I respect my mother for, and that is another reason why that photo means a lot to me… This center was in Colorado, and we had to go visit him. I wasn’t going to see him again, so I wanted to get some images while I still had the chance.”

For Hanewall, there weren’t any challenges in the editing of the photograph.

“I just pointed my camera and took the photo,” Hanewall said. “It was kind of a spur of the moment thing, but the act of getting there… was more emotionally challenging.”

“I recently started taking up photography and I also traveled to Ethiopia in July,” Schutz said. “And so visiting in Ethiopia really inspired me to take photos, and after learning about Scholastic, I thought it was a great way to put my work out there for the first time.”

“The picture was taken in a village called Gedra village, where I was born. It’s in front of this blue, almost turquoise, house. In front of it there’s [two] groups of kids, and one who’s about 15… Above hanging on the doorway of the house there’s a cross… I really liked it because the kid standing in front of the house kind of reminded me of the cross that was hanging on the doorway, with the central piece, and then the two [groups of] kids reminded me of the other sectors of the cross.”

Unlike Hanewall, the challenge for Schutz came in the editing of the photograph.

“I had to decide whether or not I wanted to keep certain things in there, and cropping, and just how I edited it was something that was challenging to me,” Schutz said. “It was just figuring out what message I wanted to send with the photo.”
Danny Huang

Students received awards for media besides photography. Danny Huang, freshman, won a Silver Key for a six-paneled comic strip and an Honorable Mention for an editorial cartoon.

“I had two pieces of art lying around, and I felt like submitting them,” Huang said. “The song the comic was based off of was ‘Nowhere Man’ by The Beatles. I like this song because the lyrics and chords are… very pleasant. I was just trying to show how music can take you to whole new worlds. When you’re listening to music you just feel mesmerized.”

In creating these pieces, Huang had to overcome some difficulties.

“The comic art was difficult because I didn’t have the best supplies for it, so I had to change a few things and make a few things look like they fit,” Huang said. “[The political cartoon] was easier because it was smaller. I just had to learn how to use a new medium.”

Huang enjoys drawing characters and scenery from his imagination. His favorite mediums are colored pencils, markers and pens.


Advice to interested students
Huang advises future participants in the contest to begin working on their pieces early.

“Start your project as early as you can, so that you can get more time to work on it and get them critiqued,” Huang said.

Schutz’s advice is that when it comes to art, someone might interpret the artwork in a different way and really like it.

“So, even if you feel like it’s not your best work, just send it in because you might get a chance to win an award and have your art hung up in the art museum,” said Schutz.

You can see the full list of scholastic art winners here: